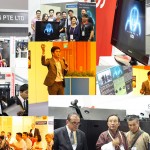 Covexis showcased its first in Asia on-demand GPS tracking solution at the EnterpriseIT 2013, held at the Marina Bay Sands. As the team geared up for their first exhibition at Asia’s largest integrated ICT event, visitors and exhibitors also caught a live demonstration of the latest FireAnts ODS (On-Demand Service).

Covexis made its debut at the EnterpriseIT 2013 with the introduction of the latest on-demand GPS tracking solution for the consumer market. During the event, Covexis presented its leading-edge FireAnts ODS at The Discovery Lounge, a featured event held in the second year running, is fast being known as “The” highlight and attraction at the exhibition for the showcase of the latest innovations by the participating exhibitors.

The on-demand GPS tracking solution aims to bring a customised experience to the consumer market. In this regard, the presentation focused on three key points the solution is built upon – simplicity, accessibility and information on-demand.

It was a rewarding experience to be a part of the 4-day exhibition held from 18 to 21 June 2013, concurrently with CommunicAsia, BroadcastAsia and SatComm, which attracted more than 35,000 international trade attendees. With the successful rollout of the event, Covexis also had an opportunity to gain insightful knowledge and experience of the convergence of technologies across the industries.

Most importantly, the Covexis team received an overwhelming amount of anticipation and positive feedback from valued customers and visitors, all of which will greatly benefit the official launch of the product.

Valued customers and on-lookers can expect to catch the official launch in the next few months, as the Covexis team works harder than ever to bring ODS, an On-Demand solution that delivers a personalised experience for the consumers.

The main complaint so far

Since the launch of iOS 6, the harshest criticisms largely revolves round the removing and replacing of Google maps with Apple’s own. Users were quick to pour in all their frustrations from using the new iOS 6 maps.

The iPhone and Google Map partnership seems like a happy marriage from day one. What followed was an explosion of LBS (Location-Based Services) apps that came onto the scene, and this trend is still continuing. PNDs (Portable Navigation Device) were seriously threatened. It is extremely common now for drivers to whip out their smart phones and use the default map app to have a quick view of how to get to their next destination.

Therefore, when Apple announced that they decided to ditch Google Maps, it also defies conventional wisdom which goes against the age old saying of “If it ain’t broken, don’t fix it“.

So it may seem now that the breakup was over something seemingly trivial like voice-guided navigation?

What this shows is simply, mapping technology has progressively become such an important and integral function expected of a phone that it is causing Apple and iPhone users so much pain and distress to not have a “properly working” one.

Maps – Can’t live without it

This leaves us with a few thoughts. We can understand what Apple is currently going through with their decision to change the maps. We actually faced a somewhat similar decision 3 years ago when we decide to implement our own map servers. What made us decide to take this difficult approach was because it was rather impossible for us to implement reports required with a certain degree of efficiency that is tolerable for customers to download, and therefore, we need to have our own servers to store and manipulate the GIS (Geographic Information Systems) data.

Maps are not easy. End users have very little understanding of what is going on behind the scenes for digital map rendering, and therefore the intolerance for whatever inadequacies the current iOS 6 maps are showing.

Firstly, map data for different regions have different specification or different sets of layers of information. In some countries or regions, e.g. Singapore, have fewer layers but yet each POI (Point of interest) or building is easily identifiable by a single address point, normally a postal code. While in some other countries or regions, there is no single identifiable address point. A postal code may indicate a region or the whole street, therefore requires a few other extra data like a house number + street name + a postal code in order to represent a distinct point on the map.

Secondly, we decided not to use the standard database but a suitable GIS database that is able to more efficiently handle GIS data. As we have different types of data format, the conversion processes also require some trial and error before we got all of them to work properly.

Thirdly, working with map tiles is more of an art than science. The positioning and placement of map tiles is more like working on a mosaic image, and that is why we named our web map service – MOSAIC. When working with different data sets and sources, we have to adjust map tiles and data so that the actual address points coincide and points to the correct position on the map.

This problem is further complicated when working on the task of overlaying the base map with satellite images. Without dwelling too deep into the intricate details, the basic problem with satellite images is simply, to be fair to Apple, is not exactly always within their control, unless Apple owns a couple of satellites and takes the images themselves. Usually, and even so for Google, the satellite images are likely to be bought from a provider. There are notably a few satellite image providers around, but the better ones will definitely be able to advise that, a good updated satellite image capture is dependent on a clear sky with no low lying clouds. Satellite images from different sections that form up the whole area may be taken on different dates, sometimes years apart, will show vastly different details when pieced together.

There is definitely hope

This is a very watered down version of our experience, the various obstacles we face before we got our own map server running. So looking back at the effort that we have put in on our own and comparing to what Apple is facing with iOS 6:

So, it is really not surprising to us that the iOS 6 maps have a lot of smoothing out work to be done, but we strongly believe that in the long run, Apple being one of the world’s most resourceful tech companies should not have any problems in getting the right people to look into this issue. Hopefully, they will one day come out of all this mess with much better control over the maps.

The ISO 22000:2005 programme specifies requirements for a food safety management system where an organization, directly or indirectly in the food chain, needs to demonstrate its ability to control food safety hazards in order to ensure that the end products is safe at the time of consumption. ISO 22000 is the first international standard which was published in September 2005 that specifies the requirements for Hazard Analysis Critical Control Point (HACCP) food safety management systems in organizations involved in the production, processing, transport, distribution of food product.

Many organizations, while preparing the implementation of ISO 22000 meet challenges in ensuring the quality and freshness of their product during transportation and distribution.

Covexis Tracking System integrated with Temperature Sensor is able to provide accurate temperature readings for organizations to achieve a consistent and high standard of quality for ensuring that their food products are delivered within the range for safe consumption.

How did we do it? 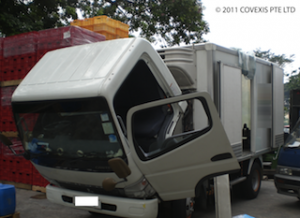 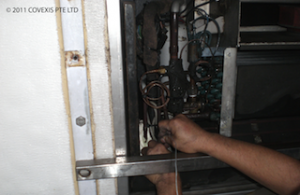 2. Inserting the Temperature Sensor cable into the refrigerated compartment of the truck. 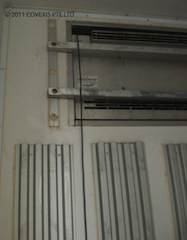 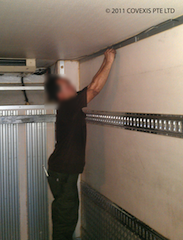 4. Fastening Temperature Sensor cable onto the walls of the refrigerated compartment.

What do we get? 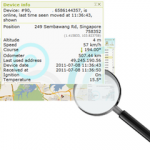 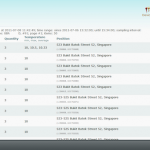 Reports with Location and Temperature Readings 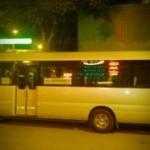 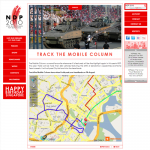 The Mobile Column, a crowd favourite whenever it is featured, will be the highlight again in this year’s NDP. This year, there will be more than 200 vehicles featuring the SAF’s 3 Generation capabilities and Home Team’s assets. It will roll pass City Hall and into the heartlands.

Covexis, together with map partner Tele Atlas, is proud to sponsor the tracking of the mobile column for NDP 2010 and also featuring our new Mosaic web map service.